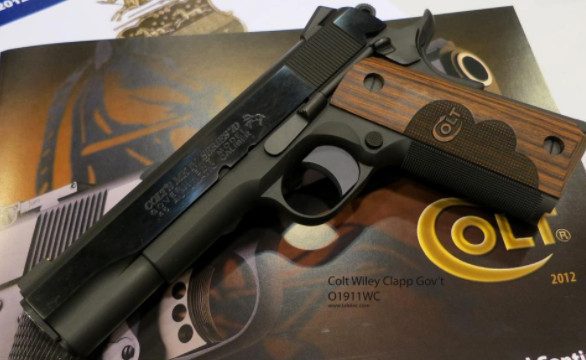 More People are carrying firearms than ever before and of those people that are carrying. Most of them are carrying some sort of subcompact 9-millimeter. Sub compact 9 millimeter weapons are by far the most popular carry weapons out there. These days there is an abundance of subcompact 9mm to choose from we’ve taken a look at a lot of them but what we’re going to discuss here best concealed carry guns in 2018 .

The Ruger Lc9s this is the LC 9 we have had these available for a number of years the S is the striker version. So in the striker version it’s the same gun if it’s the same accessories uses the same magazines but it has a short crisp 5 and a half pound trigger this has three dot wind adjustable sights a manual safety and a magazine disconnect. It’s also available in a pro version without the magazines safety and without the manual external safety. The S is the very important this is the striker fried model.

The FNS -9 compact FN Herstal came out with the FNS series 2 years ago and it has been exceptional every FNS that I fired has been an extremely accurate very reliable handgun. We love the FNS compact. What FN Herstal is done with these? They give us so many different options, they give you an external safety and also it comes up with the trigger safety. If you’re looking for concealed carry double stack subcompact 9-millimter the FNS 9 compact is really an awesome choice

This is a 12-gauge shotgun this particular one is a six shot. You can get the Mossberg 500 the Mossberg 590 a1 you can get the Maverick 88 all of these shotguns which have different prices. If we want to go in terms of quality the Maverick 88 is generally going to be the cheapest shotgun in their line these generally run about 269$. You can feed them with a variety of 12-gauge loads that’ll definitely suit all of your needs for home defense. The nice thing about shotguns is of course they throw a nice big spread so if you’re not familiar with them shotgun throws multiple pellets when you shoot it as. Shotguns give you a lot of flexibility in terms of how exactly you’re going to run a shotgun for home defense 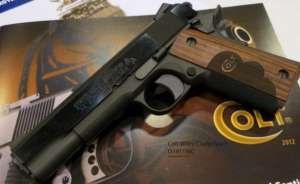 It is a wonderful firearm very slim and easy to work just slide on it.  Some ladies prefer manual safety this gun does have a manual safety on the left side of the frame. So you have got a manual safety you’ve got sights that are easy to pick up and it has got a nice trigger and it has a very slim setup. It has also got a Plus on extension or a flat base magazine that can go in for concealed carry. The Women nowadays actually wanting to carry on their person every single day and not really in their purse. So lot of ladies are actually want to carry in the waistband holster on their thigh inside.

This is a 20 gauge gun. It’s a high capacity 20 gauge pump-action shotgun and you can also have the variety of 20 gauge load to run in this gun that are low recoil but still highly effective. It offers the same benefits as any other shotguns but in a slightly smaller caliber a little bit less kick a little bit less recoil allowing you to keep the rounds on target and this is a great gun. Shotguns are wonderful addition to the potential home defense arsenal so we recommended 20 and 12 gauge shotguns

It is a fine firearm. The bolt throw is really short it’s got the recoil reduction system basically the gun is actually engineered is to mitigate the recoil of 45 ACP. It has a 25 round extended magazine. You can also run a 230 grain expanding projectile. This particular rig has a very low recoil so very fast follow up shots and it has also got a flashlight on it, it has also got a red dot sight for better accuracy. It has also a folding stock. This is just the ideal personal defense weapon.

It’s a 9-millimeter semi-automatic magazine-fed little pistol. The slide on this thing is relatively difficult it is a pullback and that’s something that’s going to be a big factor but it got an excellent trigger that does the trigger on that gun is wonderful and that’s an easy gun to shoot. It has decent little sight that pick up relatively easy. Women’s can easily carry this gun with their bra holster.

The J-frame guns they are simple, reliable and generally they are great guns. The problem with j frames they sort of have a u-shaped utility curve so if you are never going to take  class never going to learn how to shoot never going to do anything with a gun other than by unloaded stick it in a sock drawer. The j frame is probably the best choice for you because it is the easiest you put it on target and that’s how you get five shots out of it easy peasy and in the middle where you’re trying to learn how to shoot well and become a good shooter.

When it comes to sized and comfortableness, the all new Tiffney Blue Handgun allows the best of both worlds. Typically, with pistols of these attribute, the design of the handgun does a poor job of adjudicating issues concerning felt recoil. This firearm can cause discomfort for shooters who are not familiar with shooting pocket-size framed pistols. Seasoned gunmen are familiar with this and line up their grip, but have to work harder to keep the pistol on target. The design of the new G43 allow for a more comfortable and confident shooting experience for all types of users.

Brought out by Kahr Arms, the CW9 is represents as one of the 1st pistols or hanguns especifically designed for concealed carry and it’s also one of the best guns for people wo have small hands. Although it is a pretty simple design without a lot, the bells and whistles, the CW9 is still a impressive choice as a for small hand people. It’s reliable and precise handgun and can often be purchased for less than $400, which is plus point for those on a strict budget. In Addition, the CW9 also uses a seven round single stack magazine. The CW9 significantly thinner, which is good for people with smaller hands. At 0.9″ wide, the CW9 is among the thinnest handgun to choose from.

Well a major problem with the CW9 is that it has a pretty stiff recoil spring and some people feel difficulty on racking the slide on it. Nevertheless, it’s a nice self-protection handgun.

Made by Argentine firearms manufacture Bersa, S.A and weighing only 20 ounces when unloaded, this lightweight and small semi-automatic is chambered in the ever-popular .380 ACP caliber and able to literally slip into your pocket. Boasting both single and double-action trigger modes the single mode only requires 4 pounds of pressure to shoot, meaning it’s got some serious accuracy when used properly. Sharing some features with the compact Beretta and the Walther PPK- it sells for half the price but doesn’t compromise on cool factor. It’s an extremely popular gun in South America due to it being the most powerful cartridge allowed to be owned by civilians. It’s easy to maintain and smell as hell, just like everyone like it.

You may have heard this called by its more common term the XD extreme Duty. However, the HS actually stands for Hrvatski Samokres(which translates to Croatian Pistol). There’s a reason for that this series of semi-automatic pistols is made and manufactured in Krlovac, Crotia by the HS Product Company. Although it’s marketed as the Springfield Armory XD- that only denotes where it’s licensed and sold in the United States. It’s adopted Croatian military and police this locked breech, short recoil-operated, striker fired semi-automatic pistol is lightweight and considered especially safe for the user to operate. With a huge variety of options and variations, this one is a sure fire.